"Subconsciously, we see an attack on ourselves and our beliefs as a threat and we attempt to block with a counterstance.

But it is not enough to stand on the opposite river bank, shouting questions, challenging patriarchal, white conventions. A counterstance locks one into a duel of oppressor and oppressed; locked in mortal combat, like the cop and the criminal, both are reduced to a common denominator of violence. The counterstance refutes the dominant culture’s views and beliefs, and, for this, it is proudly defiant. All reaction is limited by, and dependent on, what it is reacting against. Because the counterstance stems from a problem with authority—outer as well as inner—it’s a step towards liberation from cultural domination. But it is not a way of life. At some point, on our way to a new consciousness, we will have to leave he opposite bank, the split between the two mortal combatants somehow healed so that we are on both shores at once and, at once, see through serpent and eagle eyes. Or perhaps we will decide to disengage from the dominant culture, write it off altogether as a lost cause, and cross the border into a wholly new and separate territory. Or we might go another route. The possibilities are numerous once we decide to act and not react."

"The struggle is inner ... our psyches resemble the bordertowns and are populated by the same people. The struggle has always been inner, and is played out in outer terrains. Awareness of our situation must come before inner changes, which in turn come before changes in society. Nothing happens in the 'real' world unless it first happens in the images in our heads."


"From this racial, ideological, cultural and biological cross-pollinization, an 'alien' consciousness is presently in the making – a new mestiza consciousness, una conciencia de mujer. It is a consciousness of the Borderlands."

"The ambivalence from the clash of voices results in mental and emotional states of perplexity. Internal strife results in insecurity and indecisiveness. The mestiza’s dual or multiple personality is plagued by psychic restlessness.

In a constant state of mental nepantilism, an Aztec word meaning torn between ways, la mestiza is a product of the transfer of the cultural and spiritual values of one group to another. Being tricultural, monolingual, bilingual or multilingual, speaking a patois, and in a state of perpetual transition, the mestiza faces the dilemma of the mixed breed ....

El choque de un alma atrapado entre el mundo del espiritu y el mundo de la tecnica a veces la deja entullada. Cradled in one culture, sandwiched between two cultures, straddling all three cultures ad their value systems, la mestiza undergoes a struggle of flesh, a struggle of borders, an inner war. Like all people, we perceive the version of reality that our culture communicates. Like others having or living in more than one culture, we get multiple, often opposing messages. The coming together of two self-consistent but habitually incompatible frames of reference causes un choque, a cultural collision."

"These numerous possibilities leave la mestiza floundering in uncharted seas .... La mestiza constantly has to shift out of habitual formations; from convergent thinking, analytical reasoning that tends to use rationality to move toward a single goal (a Western mode), to divergent thinking, characterized by movement away from set patterns and goals and toward a more whole perspective, one that includes rather than excludes.

The new mestiza copes by developing a tolerance for contradictions, a tolerance for ambiguity .... In attempting to work out a synthesis, the self has added a third element which is greater than the sum of its severed parts. That third element is a new consciousness–a mestiza consciousness–and though it is a source of intense pain, its energy comes from continual creative motion that keeps from breaking down the unitary aspect of each new paradigm.
En unas pocas centurias, the future will belong to the mestiza. Because the future depends on the breaking down of two paradigms, it depends on the straddling of two or more cultures. By creating a new mythos–that is, a change in the way we perceive reality, the way we see ourselves, and the ways we behave–la mestiza creates a new consciousness."

Posted by Marco Alexandre de Oliveira at 10:52 AM No comments: 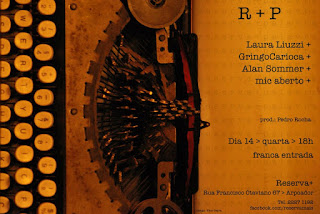